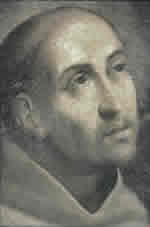 – Substantial union with God is that by which the soul exists.

– The union of likeness, also called transforming or mystical union, is that by which the soul becomes like God.

– God is darkness to the soul in that the divine is essentially other than the human.

– Since the means must be proportionate to the end, the soul must travel in darkness to the Divine Darkness.

– The journey in darkness is named the via negativa.

– Night is the image for the dark journey of detachment as the soul actively purges herself of desires for that which is specific, concrete, and particular and as God purges her of desires and dependencies.

– Detached in terms of her senses and higher faculties, the soul knows only the dark, confused, and general, which is God.

– In the experience of being purged by God, suffering is epistemology.

– Love is both the mode and content of knowing.

St. John of the Cross stands as one of the most important mystical philosophers in Christian history. The son of a rich merchant, John was born Juan de Yepes y Alvarez in Fontiveros, Spain in 1542. John’s father died when the boy was quite young, leaving his mother, a member of a lower social class, to raise him alone. After gaining employment in a plague hospital, John, at age 18, began to study with the Jesuits. He entered the Carmelite Order in 1563, continuing his studies at the University of Salamanca, where he began to teach while still a student. After being ordained in 1567, John met St. Teresa of Avila, another of the great mystics of the Christian tradition.

Following Teresa’s lead in attempting to reform his Order, John, in 1568, initiated a very severe form of monasticism in a tiny farmhouse. These monks went so far as to go barefoot, indicating their commitment to poverty, lending to them the appellation of “Discalced” or “shoeless.” Over time, a rift arose between the traditional Carmelites and John’s Discalced Carmelites, leading in 1576 to John’s arrest and imprisonment. During this period of imprisonment, John wrote much of the poetry that would provide his greatest contribution to later generations.

Eventually, the rights of the Discalceds were recognized, and John took on various roles of leadership within the order. After some fifteen years of leadership, he died in 1591, leaving behind a number of remarkable works of Christian mysticism: Ascent of Mount Carmel, Dark Night of the Soul, and the Spiritual Canticle of the Soul.

The Catholic Encyclopedia includes a lengthy article on St. John of the Cross. Another article is available from the Teresian Carmel in Austria.

Major Works of Saint John of the Cross