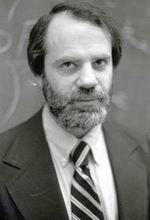 Saul Kripke is an American philosopher now emeritus from (Princeton) and professor of philosophy at CUNY Graduate Center.

He is best known for his attack on the descriptivist (Fregean, Russellian) theory of reference with respect to proper names, according to which a name refers to an object by virtue of the name’s being associated with a description that the object in turn satisfies. He gave several examples purporting to render descriptivism implausible (e.g., surely Aristotle could have died at age two and so not satisfied any of the descriptions we associate with his name).

Saul Kripke proposed instead a causal theory of reference, according to which a name refers to an object by virtue of a causal connection with the object as mediated through communities of speakers. Kripke also raised the prospect of a posteriori necessities – facts that are necessarily true, though they can be known only through empirical investigation. Examples include “Hesperus is Phosphorus”, “Cicero is Tully”, and other identity claims where two names refer to the same object. (These two contributions – causal reference and a posteriori necessity – have been echoed by Hilary Putnam, and there is controversy as to whether Kripke was in turn echoing earlier work by Ruth Barcan Marcus.) Finally, Kripke gave an argument against identity materialism in the philosophy of mind, the view that every mental fact is identical with some physical fact. Kripke argued that the only way to defend this identity is as an a posteriori necessary identity, but that such an identity – e.g., pain is C – fibers firing – could not be necessary, given the possibility of real honest – to – goodness pain that has nothing to do with C – fibers firing. Similar arguments are defended today by David Chalmers. These three contributions can be found in Kripke’s lectures entitled “Naming and Necessity”.

Kripke also made interesting contributions to the study of the later Ludwig Wittgenstein in lectures published as Wittgenstein on Rules and Private Language, although his work here has been faulted for being not particularly true to the historical Wittgenstein.

Indeed, many philosophers refer to the subject of Kripke’s book as “Kripkenstein,” on the grounds that whomever the text is about, it’s not about Wittgenstein. Kripke’s book has also been faulted for not giving credit to other authors who interpreted Wittgenstein similarly (see e.g. Robert J. Fogelin’s Wittgenstein).

Kripke’s influence has been substantial; much of his work, unfortunately, exists only in tape – recorded or transcript form.

Kripke also published substantial novel work in formal logic – particularly in the semantics of modal logic – while in his teens.

He was the winner of the 2001 Schock Prize in Logic and Philosophy.