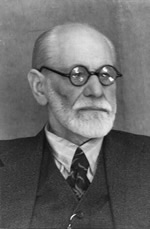 – Human behavior is the result of both heredity and environment.

– By means of the techniques of free association and analysis of symbols, we may learn about the structure and functioning of self.

– The two principles of mental functioning are survival and pleasure.

– Fundamental human drives – eros and thanatos – that arise in the unconscious are expressions of the id; the successful repression of id impulses is called ‘sublimation’, which is a prerequisite of civilization.

– Children may feel both jealousy and hostility toward one parent and love for the other (Oedipal complex).

– Motivations originate from unconscious wishes; conflict between these wishes is expressed in both normal and pathological behaviour.

– Dreams are disguised representations of repressed wishes; the manifest appearances of dream-images can disguise latent wishes.

Sigmund Freud was born on May 6, 1856 at Freiberg, Moravia, now Pribor in the Czech Republic. Freud developed the techniques of “Psycho-Analysis” for the treatment of psychological and emotional disorders.

Freud graduated as Doctor of Medicine from the Medical School of the University of Vienna in 1881.

In September 1891 Freud moved to 19 Berggasse in Vienna, where he lived and worked for the next 47 years. In 1896 in his paper, “The Aetiology of Hysteria,” Freud first used the term “Psycho-Analysis.” In October of 1902 a circle of physicians grouped around Freud began a weekly discussion of Psycho-Analysis. From 1908 on the group called itself “Vienna Psycho-Analytical Society.”

In 1910 the “International Psycho-Analytical Association” was formed in Nuremberg with Swiss psychologist Carl Jung as the first president. Psycho-analysis soon gained acceptance all over the world as a scientific discipline and as a therapeutical approach.

On March 12, 1938 German troops marched into Austria and the Nazis assumed power. Freud’s daughter Anna was arrested on March 22 by the Gestapo and held for a day.

On June 4, following numerous international interventions, Freud was allowed to emigrate to London with his wife, his youngest daughter Anna, his housekeeper Paula Fichtl and his medical caretaker Josefine Stross. Freud’s other children also managed to escape. His brother lost all his property when he left Vienna, and four elderly and infirm sisters were forced to remain in Vienna and killed in concentration camps in 1941. Freud moved to a house at 20 Maresfield Gardens in London’s Hampstead section.