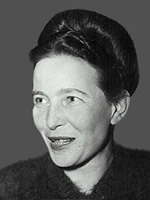 – As human beings, we live in a tragically anbiguous condition, but we must assume responsibility for the direction of our lives.

– Every person is originally free.

– Woman is the ‘other’; she lives in a world in which men have compelled her to be the second sex.

– Despite the historical and cultural conditions under which women have been oppressed, they must assume their human dignity as free and independent persons.

– Ethics requires a definitive commitment through action; morality and politics are interrelated.

De Beauvoir grew up in a respected borgeois family, the eldest of two daughters. She adopted atheism while still an adolescent, and decided to devote her life to writing and studying.

She graduated from the Sorbonne in 1929, writing a thesis on Leibniz. Philosophy was, for her a discussion and study of the essentials of existence– though she was also fascinated by beauty and aesthetics.

De Beauvoir taught high school while developing the basis for her philosophical thought between 1931 and 1943. Following in the tradition of the 18th century ‘gadfly’ philosophe’s, De Beauvoir used her background in formal philosophy to voice her sentiments on feminism and existentialism.

Jean-Paul Sartre and De beauvoir met after her studies in the Sorbonne, the beginning of a friendship which lasted until his death in 1980. This period began what she described as a ‘moral’ phase of life; the culmination of which was her most important philosophical work, The Ethics of Ambiguity(1948). She began the phase with an essay entitled Pyrrhus et Cineas(1944), and the earlier novel called L’Envitee(1943).

No doubt born of the confusion and madness of WWII, De Beauvoir included in her Ethics Sartre’s ontology of being-for-itself and being-in-itself. She also draws heavily on his conception of human beings as creatures who are free. Freedom of choice, humanity’s utmost value, is the criterion for morality and immorality in one’s acts. Good acts increase one’s freedom, while bad ones limit that freedom.

No doubt, her linkage to Sartre was the reason that she received the unwanted title of existentialist. Among other things, she also was an anti-colonialist, publicly criticising France’s position in Algiers, a pro-abortionist and a socialist with Marxist sympathies.

Her major thrust into philosophical analysis was due to her life-long friendship with Sartre. Using some of the ideas she worked with in Ethics and a few of the underpinnings of existentialism as described by Sartre, she went on to produce her famous work, The Second Sex. Working with the idea that women are the “other,” and another statement: “that women is not born, but made,” De Beauvoir delves deep into the history of women’s oppression. This was the definitive declaration of woman’s independence.

Her other works include a four part autobiography, a prize winning novel called The Mandarins, and a novel condemning society for its treatment of the elderly, The Coming of Age. Writing on her mother’s death she produced A Very Easy Death. One of her final novels was a diary recording the slow lingering death of her friend Sartre, called Adieux: A Farewell to Sartre.

Her final words on Sartre’s death(and her own, in Adieux) were: “My death will not bring us together again. This is how things are. It is in itself splendid that we were able to live our lives in harmony for so long.”