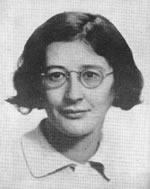 – Thought is inextricably linked to action.

– The person is a creation of natural and social forces and can ve ‘decreated’ by them.

– Pure goodness for which the human aspires is found by God’s direct descent and through the mediation of natural and social structures.

– The suffering of Christ is the paradigm action for goodness.

Simone Weil was a moral and political philosopher, teacher, activist, and mystic that searched for truth and ways to overcome the injustices of the world. Her philosophical pursuits began in her youth as she studied at the best schools in Paris and continued until her untimely death. Weil focused her philosophical inquires on social and political injustices and religious inquiry. She wrote mainly in essays and her thought can be characterized as a combination of Marx and Plato that centered on the goal of alleviating oppression and suffering

Weil was born in Paris on February 3, 1909. She was often ill as a child, yet showed great intellectual potential. Weil worshipped her brother André and much of her success can be attributed to her desire to follow her brother’s example. Weil’s parents, Bernard and Selma Weil, were both Jewish, but did not practice any religion.

Weil’s parents encouraged their daughter toward what Selma referred to as “the manly virtues.” Weil excelled in all subjects that maintained her interest and attended the Lycée Henri IV in order to prepare for the entrance exam for the elite Ecole Normale Supérieure. Weil was accepted by the Ecole Normale in 1928 and excelled in her studies. She completed several essays in which she explored her Marxist beliefs in relation to power, work, equality, and the working class.

After graduation Weil received a teaching position at Le Puy. While teaching, Weil became involved in the local political activity, joining the unemployed and striking workers. Although members of the middle class criticized her involvement with the workers, Weil was undeterred. She continued to write about her views concerning the democratic and capitalist societies, but strayed from her previous Marxist beliefs.

During this time, Weil wrote Oppression and Liberty and numerous short articles for trade union journals. In these works Weil critiques popular Marxist thought and provides a pessimistic account of the limits of capitalism and socialism. In 1934 she was forced to stop teaching because of her unorthodox methods and began working in a Paris factory. Factory work was very satisfying for Weil as she believed that her experience was allowing her to connect with the working class. Unfortunately, she could not continue to work in the factories because of her lack of physical strength and poor health.

By 1936 Weil had returned to teaching, but was not as enthusiastic as she had been at her previous positions. That same year she went to Spain to join the anarchist militia in the Spanish Civil War. She did not want to fight, but instead she desired to share in more experiences of the working class. She was injured as she cooked at the front lines and returned to France with her health depleted to the point that she never held a regular position again.

After her experience at war, Weil began to focus her attention on religion. She developed an obsession with discovering more about God and his will for her life. She had her first mystical experience at the Solesmes Monastery as she listened to the monks chant. She later had another mystical experience in which she stated that “Christ himself came down and He took me” as she read George Herbert’s poem, “Love bade me welcome while my Soul drew back.” After these religious experiences Weil spent the rest of her life trying to discover God’s will for her life and articulate the intellectual consequences of her experiences.

Weil’s thoughts on religion are found in her essays, journal entries, and letters that were later combined in the book Waiting on God. In her writing, Weil relates her beliefs in Christianity to her beloved Greek Philosophy, especially that of Plato. Her religious writing are also filled with her need for sacrifice and martyrdom through an ascetic lifestyle that subsequently led to her untimely death. Although her religious beliefs are scattered throughout her writings, her thoughts on religion form a mystical interpretation of Christianity, which has in recent years received recognition and respect.

Weil was forced to flee to America with her family in 1942 to escape Hitler’s invading army. Although she enjoyed her stay in America, she could not endure the guilt she experienced for not suffering along with her compatriots in France. After seven months in America, Weil left for England to join the Free French. She was only allowed to do paperwork for the Free French and she completed her work with excessive enthusiasm. In this time, Weil also completed The Need for Roots in which she addressed the economic conditions of the working class because of the two world wars and speculated on France’s potential.

Weil Died in 1943 at Grosvenor Sanatorium in England at the age of thirty-four. She had begun to eat only what the French official ration allowed. She was diagnosed with tuberculosis and continued to limit her food intake thinking that the food she did not eat would somehow go to her compatriots in France. Upon her death, it was ruled that she had committed suicide by starving herself “while the balance of her mind was disturbed.” This ruling is often contested, as many believe that Weil’s death was a result of her martyrdom taken to its logical end.

At the time of her death, Weil had published only a few articles and was not widely recognized. Her odd life has generated much confusion and speculation in relation to her beliefs. Although her work has often been misrepresented, she has since been recognized as one of the greatest spiritual thinker and activists of the twentieth century. Weil’s writing is often fragmented and difficult to follow, yet when considered in its entirety her beliefs create a seamless whole that is reflected in the remarkable life of this complex woman.