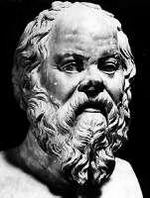 Socrates, the celebrated Greek philosopher and moralist, was born at Athens in the year 469 B.C. His father, Sophroniskus, was a sculptor and he followed the same profession in the early part of his life. His family was respectable in descent, but humble in point of means. He had the usual education of the Athenian citizen, which included not only a knowledge of the mother tongue, and readings in the Greek poets, but also the elements of arithmetic, geometry and astronomy as then known. Excepting in connection with his philosophical career, few circumstances of his life are known. He served as a hoplite, or heavy-armed foot-soldier, at the siege of Potidaea, at the battle of Deliurn, and at Amphipolis, and his bravery and endurance were greatly extolled by his friends.

An interesting thing about Socrates was that his religious thoughts were very different from basically about everybody during that time. While the Greeks were busy worrying about pleasing some petty gods running around on top of Mount Olympus, Socrates was focused on the idea of a much greater and perfect God that created everything and that watched over all of us. He thought that there was a higher and greater God than that of the pagan Greek gods. Socrates would make fun of the Greek gods through the Iliad and the Odessy. He would read sections of them to his students, talking about their jealousy and pride. Socrates would wonder how people actually believe them to be gods as imperfect as they were. To Socrates they were just immortal humans with magical powers.

Somewhere about the middle period of his life, he relinquished his profession as statuary, and gave himself up to the career that made him famous. Deservedly styled a philosopher, he neither secluded himself for study, nor opened a school for the regular instruction of pupils. He disclaimed the appellation of teacher; his practice was to talk or converse, “to prattle without end,” as his enemies said. Early in the morning he frequented the public walks, the gymnasia for bodily training, and the school where youths were receiving instruction; he was to be seen at the market-place at the hour when it was most crowded, among the booths and tables where goods were exposed for sale. His whole day was usually spent in this public manner. He talked with any one, young or old, rich or poor, who sought to address him, and in the hearing of all who stood by. As it was engaging, curious, and instrutive to hear, certain persons made it their habit to attend him in public as companions and listeners.

Another peculiarity of Socrates was his persuasion of a special religious mission, of which he believed that he had received oracular intimation. About the time when he began to have repute as a wise man, an admirer and friend, Chaerephon, consulted the oracle at Delphi, as to whether any man was wiser than Socrates. The priestess replied “none.” The answer, he said, perplexed him very much; for he was conscious to himself that he possessed no wisdom, on any subject, great or small. At length he resolved to put the matter to the test, by taking measure of the wisdom of other persons as compared with his own. Seleting a leading politician, accounted wise by himself and others, he put a series of questions to him, and found his supposed wisdom was no wisdom at all. He next tried to demonstrate to the politician himself how much he was deficient; but he refused to be convinced. He then saw a meaning in the oracle, to the effect that his superiority to others lay not in his wisdom, but in his being fully conscious of his ignorance. He tried the same experiment on other politicians, then on poets, and lastly on artists and artisans, and with the same result. Thereupon, he considered it as a duty imposed on him by the Delphian god, to cross-question men of all degrees, as to their knowledge, to make them conscious of their ignorance, and so put them in the way of becoming wise. According to Xenophon, he would pass from his severe cross-questioning method, and address to his hearers plain and homely precepts, inculcating self-control, temperance, piety, duty to parents, brotherly love, fidehty in friendship, diligelice, etc.

Cicero said that “Socrates brought down philosophy from the the heavens to the earth.” The previous philosophies consisted of vast and vague speculations on nature as a whole, blending together Cosmogony, Astronomy, Geometry, Physics, Metaphysics, etc. Socrates had studied these systems, and they had left on his mind a feeling of emptiness and unsuitability for any human purpose. It seemed to him that men’s endeavors after knowledge would be better directed to human relationships, as involving men’s practical concerns. Accordingly he was the first to proclaim that “the proper study of mankind is man;” human nature, human duties and human happiness make up a field of really urgent and profitable inquiry.

In the year 400 B.C., an indictment was laid against Socrates, in the following terms; “Socates is guilty of crime; first, for not worshipping the gods whom the city worships, and for introducing new divinities of his own; next for corrupting the youth. The penalty due is death.” The trial took place before a court composed of citizen-judges, like modern-day juries, but far more numerous; the number present seems to have been 557.

His defense is preserved by Plato, under the title Apology of Socrates. He dwelt on his mission to convit men of their ignorance for their ultimate benefit; pronounced himself a public blessing to the Athenians; declared that if his life was preserved he would continue in the same course; and regarded the prospect of death with utter indifference. By a majority of five or six he was adjudged guilty and sentenced to death by poison. The last day of his life he passed in conversation with his friends on the Immortality of the soul. He then drank the hemlock, and passed away with the dignity and calmness becoming his past career.

Although Socrates never wrote anything of his own, we did manage to come to know and understand Socrates’s thoughts and methods through some dialogs recorded mostly by his follower and disciple Plato. We can’t exactly be sure that these are all of Socrates’s words. Probably the closest record of Socrates’s actual words was his farewell speech given while he was in court called The Apology.