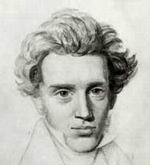 – As human beings, we are often in situations in which we must choose between incompatibloe alternatives.

– God may place us religiously in paradoxical situations of anguished choice as a test of faith.

– There are objective problems, but they cannot be answered objectively for the person, who must decide about his or her subjective relation.

– We live aesthetucally without commitment, but ethical situations demand decisions from us that are decisive.

– The individual is more important than the universal.

– Uncertainty permeates human life and is only overcome by human decisiveness.

– Paradox stands at the center of all human existence.

– The essential self lives inwardly in ways that cannot be given full outward expression.

Søren Kierkegaard was born to an affluent family in Copenhagen, the capital of Denmark. His father, Michael Pedersen Kierkegaard, was a strongly religious man. Convinced that he had earned God’s wrath, he believed that none of his children would live to the age of 34. The sins necessitating this punishment, he believed, included cursing the name of God in his youth, and possibly impregnating Kierkegaard’s mother out of wedlock. In fact, his predictions were realized for all but two of his seven children.

This early introduction to the notion of sin, and its connection from father and son, laid the foundation for much of Kierkegaard’s work (particularly Fear and Trembling). Kierkegaard’s mother, Anne Sørensdatter Lund Kierkegaard, is not directly referred to in his books, although she too affected his later writings.

Despite his father’s occasional religious melancholy, Kierkegaard and his father shared a close bond. Kierkegaard learned to explore the realm of his imagination through a series of exercises and games they played together.

Another important aspect of Kierkegaard’s life (generally considered to have had a major influence on his work) was his broken engagement to Regine Olsen. Kierkegaard’s motive for ending the engagement remains mysterious. It is generally believed that the two were deeply in love — perhaps even after she married Johan Frederik Schlegel (1817-1896), a prominent civil servant (not to be confused with the German philosopher Friedrich von Schlegel, 1772-1829). For the most part, their contact was limited to chance meetings on the streets of Copenhagen. Some years later, however, Kierkegaard went so far as to ask Regine’s husband for permission to speak with her, but was refused. Soon afterward, the couple left the country, Schlegel having been appointed Governor in the Danish West Indies. By the time Regine returned, Kierkegaard was dead. Regine Schlegel lived until 1904, and upon her death she was buried near Kierkegaard in the Assistens Cemetery in Copenhagen.

Kierkegaard’s final years (1854-1855) were taken up with a sustained attack on the Danish State Church by means of newspaper articles published in The Fatherland (Fædrelandet) and a series of self-published pamphlets called The Moment (Øieblikket). Kierkegaard was initially called to action by a speech by Professor Hans Lassen Martensen, which called his recently deceased predecessor Bishop Jakob P. Mynster a “truth-witness, one of the authentic truth-witnesses.” Kierkegaard had an affection towards Mynster, but had come to see that his conception of Christianity was in man’s interest, rather than God’s, and in no way was Mynster’s life comparable to that of a ‘truth-witness.’

On 2 October, 1855, before the tenth number of the Moment could be published, Kierkegaard collapsed on the street and was taken to hospital. He stayed in the hospital for nearly a month and refused to receive communion from a priest of the church, whom Kierkegaard regarded as merely officials and not servants of God. He said to his friend since boyhood Emil Boesen, who kept a record of his conversations and was himself a pastor, that his life had been one of great and unknown suffering, which looked like vanity to others but was not. Kierkegaard died in Frederick’s Hospital after being there for over a month, possibly from complications from a fall he had taken from a tree when he was a boy. He was interred in the Assistens Kirkegård in the Nørrebro section of Copenhagen.

At Kierkegaard’s burial at Assistents Cemetery, his nephew Henrik Lund caused a disturbance by protesting that Kierkegaard was being buried by the official church even though in his life he had broken from and denounced it. Lund was later fined.