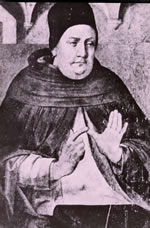 – The existence of God is not self-evident to reason, but it is demonstrable.

– In God, essence and existence are inseparable, indeed, identical: It belongs to ‘what’ God is ‘that’ God is.

– The essence of finite things is separable from their existence.

– The finite order receives its existence by ‘participation’ in the divine.

– God is not only the first cause of all motion in the finite order, he is also the concurrent cause of all the operations of the natural order.

– The substances of finite things consist in a union matter and form.

– The forms or ideas of things, therefore, subsist primarily in things rather than as independent extra-mental forms or as mental abstractions resting on examination of things.

– Human knowledge arises as a result of the intellectual analysis of the forms of things as they area accessible to sense perception.

Thomas Aquinas was born in his family’s castle around the end of 1224, near Aquino. He was the youngest of seven kids that his family had. His father was a relative of Frederick II, Emperor of Sicily. In 1230, his parents presented him as an oblate to the Benedictine Abbey at Monte Cassion (he was offered up for the religious life). In 1239, the conditions became dangerous, when the Pope and Frederick II had a quarrel, and Aquinas returned to his parent’s home for a couple of months. Then, he went to study liberal arts at the University of Naples. His father died at Christmas time in 1243, and Thomas joined the Dominican Order at Naples.

His family was very displeased at this choice, and a month later while he was traveling with the Dominican General, his brothers kidnapped him, and brought him home. He was held captive for a year, and then his brothers let him go, and he traveled back to Paris to continue his studies as a novice.

In 1248, he went with the famous Dominican scholar Albert the Great to Cologne. Albert valued the many writings of Aristotle and passed them on to Aquinas. Aquinas was very large, physically, and quiet. Many of the other students called him “the dumb ox”, and Aquinas said that one day the entire world would be listening to the bellowing of this “dumb ox”. In 1251, Aquinas was ordained a priest at Cologne, and he went to Paris to continue his studies. In the spring of 1256, he received his licentiate in theology and became a master of theology, and became a teacher at the University of Paris.

From 1256 to 1259, Aquinas served as regent master of theology at Paris. In 1259 he was appointed Preacher General in Italy. In 1265, he was sent to Rome to serve as Regent Master.

In November of 1268, he returned to the University of Paris. Classes were suspended in early 1272, and in the spring of 1272 he returned to Naples to start a Dominican house of studies. In December of 1273, he had an experience in church, in which he says that during mass he felt that all he had written was insignificant, and he ceased writing. In 1274, Pope Gregory X summoned him to the Council of Lyons in France, and on the way he fell ill, and stopped at his sister’s house. He died in a Cistercian monastery at Fossanuova on March 7, 1274. Exactly three years after his death the Bishop of Paris condemned 219 propositions, including Aquinas’s. In 1278, a General Chapter of Dominicans upheld Aquinas’s views.

On July 18, 1323 Pope John XXII at Avignon canonized Aquinas. Soon after, the Archbishop of Paris revoked the condemnation of Aquinas’s teachings.