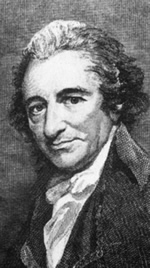 – The rights of humankind originate at birth.

– Government should exist only for the security, happiness, and unity of humankind.

– Republican government is based on reason and engenders freedom; government by hereditary succession is based on ignorance and reduces people to slavery.

– Equality of natural property and the right of suffrage are essential for a free society.

– The unrestrained communication of ideas, the rights to reform, and freedom, and freedom of religious belief are all natural rights.

– God is the first cause of all things; only by exercising reason can humankind discover God.

Thomas Paine was born in Thetford (just north of Cambridge) the son of a Quaker corset maker. His entire career, up to his age 37, had been a succession of failures and frustrations; he had from the beginning experienced extreme poverty, privation, and drudgery.

Paine arrived Philadelphia in December of 1774. Little did Paine know how fortunate he was to have a letter of introduction signed by Benjamin Franklin; he was soon employed as the editor of the Pennsylvania Magazine. He wrote, condemning it all: of Negro slavery, of the political condition of women, of the lack of copyright laws, of the cruelty to animals, of the custom of dueling, and of war as a means to settle international disputes. These particulars of the human condition meant little to anyone in those years. Another matter, however, was the question of American patriotism.

In the spring of 1775 came the battles of Concord, Lexington, and Bunker Hill. All along he was able to spread his views, as he was easily able to do in his journalistic position, — that it was common sense to support the colonies in their fight with England and to this effect he put out a small pamphlet, Common Sense: it was to effect a powerful change in the minds of many men, and won, at a critical time, a number of American colonists over to the cause of independence. Within a few months after the appearance of Common Sense, most of the states had instructed their delegates to vote for independence, only Maryland hesitating and New York opposed.

On July 4, 1776, less than six months from the date when Paine’s famous pamphlet came off the press, the Continental Congress, meeting in the State House at Philadelphia, proclaimed the independence of the United States. Directly the fighting broke out, Paine shouldered a musket and went off to join Washington’s army as a private, though, he was soon promoted as an aid-de-camp to General Greene. All along Paine continued to write often at night after a long day’s march by the light of a camp fire at times when all those around him were depressed by the many set backs which the colonial fighters were to experience. These writings were collected up and put out under the title, The American Crisis.

With the American Revolution, by 1787, having become an accomplished fact, Paine returned to England. In England, Paine brought out The Rights of Man (1792), a reply to Edmund Burke’s Reflections on the French Revolution (1790).

Burke attacked the principles of the French Revolution, and the violence and excesses of its leaders. This work, The Rights of Man made Paine a wanted man and so he escaped to France. Never one to get along with too many at any one time, Paine soon ran afoul of the strong forces in France, and, the Robespiere faction, in 1794, saw to his imprisonment. In a French prison for ten months, Paine got down to the writing of The Age of Reason.

Though himself “a pious deist,” in The Age of Reason Paine reflected the atheistic feeling that had swept France during these revolutionary times; The Age of Reason became known as the “Atheist’s bible.” On returning to America in 1802, Paine found himself, directly on account The Age of Reason, out of favour, ostracized by political leaders and churchgoers.

After seven incredible years of abuse, hatred, neglect, poverty, and ill health, Paine died in 1809, at the age of 72; and was denied burial in a Quaker cemetery.