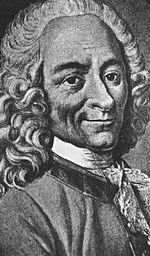 – All religions of the supernatural are based on ignorance and superstition.

– The natural and human evils in the world cannot be reconciled with the view that this is the best of all possible worlds.

– The order in the universe indicates that there is a Designer, but not necessarily a moral or immoral one.

– People should not be punished for their ideas.

– Although we can have no complete explanations of nature, the best accounts of nature are empirical and materialistic.

– There is a natural basis for ethics and justice.

– The human situation can be improved by eliminating superstition and fanaticism.

Francois Marie Arouet (pen name Voltaire) was born on November 21, 1694 in Paris. Voltaire’s intelligence, wit and style made him one of France’s greatest writers and philosophers.

Young Francois Marie received his education at “Louis-le-Grand,” a Jesuit college in Paris where he said he learned nothing but “Latin and the Stupidities.” He left school at 17 and soon made friends among the Parisian aristocrats. His humorous verses made him a favorite in society circles. In 1717, his sharp wit got him into trouble with the authorities. He was imprisoned in the Bastille for eleven months for writing a scathing satire of the French government. During his time in prison Francois Marie wrote “Oedipe” which was to become his first theatrical success and adopted his pen name “Voltaire.”

In 1726, Voltaire insulted the powerful young nobleman, “Chevalier De Rohan,” and was given two options: imprisonment or exile. He chose exile and from 1726 to 1729 lived in England. While in England Voltaire was attracted to the philosophy of John Locke and ideas of mathematician and scientist, Sir Isaac Newton. He studied England’s Constitutional Monarchy and its religious tolerance. Voltaire was particularly interested in the philosophical rationalism of the time, and in the study of the natural sciences. After returning to Paris he wrote a book praising English customs and institutions. It was interpreted as criticism of the French government and in 1734, Voltaire was forced to leave Paris again.

At the invitation of his highly-intelligent woman friend, “Marquise du Chatelet,” Voltaire moved into her “Chateau de Cirey” near Luneville in eastern France. They studied the natural sciences together for several years. In 1746, Voltaire was voted into the “Academie Francaise.” In 1749, after the death of “Marquise du Chatelet” and at the invitation of the King of Prussia, “Frederick the Great,” he moved to Potsdam (near Berlin in Germany). In 1753, Voltaire left Potsdam to return to France.

In 1759, Voltaire purchased an estate called “Ferney” near the French-Swiss border where he lived until just before of his death. Ferney soon became the intellectual capital of Europe. Voltaire worked continuously throughout the years, producing a constant flow of books, plays and other publications. He wrote hundreds of letters to his circle of friends. He was always a voice of reason. Voltaire was often an outspoken critic of religious intolerance and persecution.

Voltaire returned to a hero’s welcome in Paris at age 83. The excitement of the trip was too much for him and he died in Paris. Because of his criticism of the church Voltaire was denied burial in church ground. He was finally buried at an abbey in Champagne. In 1791 his remains were moved to a resting place at the Pantheon in Paris.

In 1814 a group of “ultras” (right-wing religious) stole Voltaire’s remains and dumped them in a garbage heap. No one was the wiser for some 50 years. His enormous sarcophagus (opposite Rousseau’s) was checked and the remains were gone. His heart, however, had been removed from his body, and now lies in the Bibliotheque Nationale in Paris. His brain was also removed, but after a series of passings-on over 100 years, disappeared after an auction.