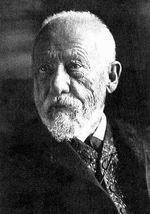 German philosopher who made important contributions to a methodology of the humanities and other human sciences. He objected to the pervasive influence of the natural sciences and developed a philosophy of life emphasising historical contingency and changeability. His ‘Philosophy of Life’ pivoted on the notion of a living spirit which develops in historical forms, clearly drawing on Friedrich Hegel’s Geist, and many regard him as a progenitor of Hegelianism. Dilthey was little known during his own lifetime, being rediscovered in post-World War One Germany.

Dilthey was the son of a Reformed Church theologian, but after studying theology at Heidelberg and Berlin, he transferred to philosophy and after completing his Doctorate at Berlin and a short time as a school teacher, dedicated himself full-time to writing, and after appointments as Basel and Braslau, took up the position as Chair of Philosophy at the University of Berlin, where he spent the remainder of his life, engaged in philosophical study and writing.

Dilthey’s aim was to find the philosophical foundations for what he called the “sciences of man, of society, and the state”, which he named Geisteswissenschaften, usually translated as “human sciences” – a term that eventually gained general recognition to collectively denote the fields of history, philosophy, religion, psychology, art, literature, law, politics and economics.

In 1883, the first volume of his Introduction to Human Sciences appeared but the second volume never appeared, only a series of essays including in 1894, Ideas Concerning a Descriptive and Analytical Psychology, a cognitive, structural psychology which, in its conception, is far ahead of its time.

Against the dominant conception of his time, Dilthey opposed the idea that the human sciences should emulate the methodology of the natural sciences, and tried to establish the humanities as sciences in their own right. In his study of interpersonal experience, its realisation in creative expression, the reflective understanding of this experience, and the “logical development” that may be attributed to the development of knowledge and culture in social and historical processes, Dilthey developed important insights. Emphasising that the essence of human beings cannot be grasped by introspection but only from a knowledge of history, the parallel with Hegel’s approach is clearly visible. Dilthey however, held that knowledge could never be final, because history is never final.

Dilthey held that the historical relativity of all ideas and institutions is the most characteristic and challenging fact in the intellectual life of the modern world. He was hostile to the construction of closed, rational systems and preferred to leave questions unsettled. This preference for leaving quesitons open, was perhaps the main contributing factor to his failure to be recognised in his own time. Only after the War, did the significance of the methodology of his historical philosophy of life come to be appreciated.