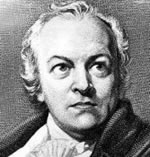 – Imagination is the Divine Being in every person.

– All division is contrary to the infinite imagination (the body is not distinct from the soul).

– Science and industry reduce the universe to a vast machine and one unalterable law.

– Empiricism limits knowledge to sensory perception; life is revealed to imaginative vision and not to the corporeal eye.

– Orthodox religions and deism enslave humankind to a system that promises future rewards or punishments, a dogma that controls human minds.

– Eternity is a condition in which no divisions exist; in order for human kind to regain this innocence, it must rediscover Paradise, an act of the poetic genius or imagination.

A British poet, painter, visionary mystic, and engraver, who illustrated and printed his own books.

Blake was born in London, where he spent most of his life. His father was a successful London hosier who encouraged Blake’s artistic talents. Blake was first educated at home, chiefly by his mother. In 1767 he was sent to Henry Pars’ drawing school. Blake has recorded that from his early years, he experienced visions of angels and ghostly monks and that he saw and conversed with the angel Gabriel, the Virgin Mary, and various historical figures.

At the age of 14, Blake was apprenticed for seven years to the engraver James Basire. Gothic art and architecture influenced him deeply. In 1783 he married Catherine Boucher, the daughter of a market gardener. Blake taught her to draw and paint, and she assisted him devoutly.

Blake engraved and published most of his major works himself. In the “Prophetic Books”, Blake expressed his lifelong concern with the struggle of the soul to free its natural energies from reason and organized religion. Among Blake’s later artistic works are drawings and engravings for Dante’s Divine Comedy and the 21 illustrations to the book of Job, which was completed when he was almost 70 years old.

Blake never shook off his economic poverty, which was in a large part due to his inability to compete in the highly competitive field of engraving and his expensive invention that enabled him to design illustrations and print words at the same time.

He died on August 12, 1827, and was buried in an unmarked grave at the public cemetery of Bunhill Fields.