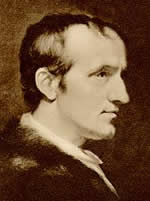 – Government usurps private judgment and individual conscience; it is the greatest obstacle to human happiness.

– There are no rights, only duties; the fundamental moral duty is universal benevolence.

– Nonviolent reform, not revolution, is the only way to achieve political change.

Godwin was educated as a rationalist dissenter from the established church. His political theories formed the basis of anarchism. His version of anarchism being a belief that the state would become unnecessary as human beings developed their powers of moral and political self-determination.

Godwin’s ideal society is intensely equalitarian & a complete anarchy, although he tolerated the idea of a loosely knit democratic transition that would witness the withering of the State. Strongly antiviolence & completely rationalistic he carried his doctrine to the point of total alteration in human relations. Ignoring economics & starting from a highly individualistic psychology, he argued for education & social conditioning as the chief factors in character formation.

William Godwin’s book Enquiry Concerning Political Justice, started in 1791 published in February 1793 is intended to “philosophically place the principles of politics on an immovable basis”. It begins with a summary of those principles.

The turning point in his career was the French Revolution, which spurred him to write his major work, Political Justice, completed in 1793. Though many were disillusioned after the early years of the Revolution, Godwin’s liberalism remained intact. The publication of this work gained him a far-reaching contemporary fame.

In 1796 he renewed an acquaintance with Mary Wollstonecraft. They took up residence together &, with the approaching birth of their child & despite his attacks upon the institution of marriage, were married in 1797. Their brief marriage, ended by the death of his wife, was described as his happiest period.