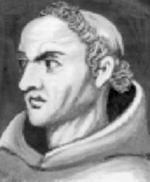 – Nominalism rejects the view that there are universals (essences) in things; it emphasizes the experienced world of contingent beings.

– The name used for a thing does not capture the essence of the thing, but is simply a conventional sign used to refer to the thing.

– Ockham’s razor is the principle of economy in theorizing; it calls for the least number of assumptions in the construction of an explanation.

– God is known by faith in his revelation, not by reason examining his creation.

– Creation and salvation are the manifestations of the divine will that call each person to a covenant partnership.

– The claim of the papacy to be supreme over the secular realm is to be rejected.

– The gospel law is the law of freedom.

William of Ockham was a Franciscan friar and philosopher, from Ockham (near Ripley, Surrey), England.

William devoted to a life to extreme poverty and minimalism. A pioneer of nominalism, some consider him the father of modern epistemology and modern philosophy in general, because of his strongly argued position that only individuals exist, rather than supra-individual universals, essences, or forms, and that universals are the products of abstraction from individuals by the human mind and have no extra-mental existence. Ockham is also considered one of the greatest logicians of all time.

Dave Beckett of the University of Kent at Canterbury writes:

“The medieval rule of parsimony, or principle of economy, frequently used by Ockham came to be known as Ockham’s razor.”

Summoned to Avignon in 1324 by Pope John XXII on accusation of heresy, William spent four years there in effect under house arrest while his teaching and writing were being investigated.

During this period, at the request of Brother Michael of Cesena, head of the Franciscan order, Ockham investigated the controversy between the Franciscans and the Papacy on the doctrine of apostolic poverty, which was central to Franciscan doctrine but anathema to the Pope.

Ockham concluded that Pope John XXII was a heretic, a position that he later put forth in writing. Before a conclusion was reached about the heresy or orthodoxy of William’s philosophy, he fled Avignon on May 26, 1328 with Michael of Cesena and a few other friars.

They sought the protection of Emperor Louis IV in Bavaria. After criticizing the pope, he is believed to have been excommunicated, although historical sources vary. Ockham spent much of the remainder of his life writing about political issues, including the relative authority and rights of the spiritual and temporal powers.

He died in a convent in Munich, Bavaria (now Germany).

Major Works of William of Ockham