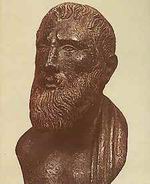 Zeno of Citium (The Stoic) was a Hellenistic philosopher from Citium, Cyprus.

Zeno was the son of a merchant and a student of Crates of Thebes.

Zeno was, himself, a merchant until the age of 42, when he started a school.

According to a Legend on one trip Zeno was shipwrecked and he somehow ended up in Athens. He met philosophers there and he fell in love with philosophy. He soon began studying under the philosophers such as Crates, Stilpon, Xenocrates, and others.

When he asked a man working at a bookstore where men like Socrates could be found the man pointed at somebody walking down the street and said, “follow him”. It was Crates, Zeno’s first instructor. What we know of him mainly comes from later philosophers. It is known, however, that Zeno did not begin teaching on his own until late in life.

Named for his teaching platform, the Painted Porch (“stoa” is Greek for “porch”), his teachings were the beginning of Stoicism.

None of Zeno’s works have survived; he is believed to have taught that tranquility can best be reached via indifference to pleasure and pain.

Stoicism was the first philosophy in history to morally condemn slavery. Emancipation of slave makes their freedom of thought public, maybe also because Zeno was a slave for some time.

Stoicism was important as it was adopted by many important Romans (e.g. Cicero, Seneca, Josephus, Marc Aurel)

Major Works of Zeno of Citium

– No works of Zeno of Citium survived.