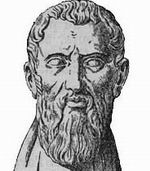 – The Paradox of the Race Course argues that motion would require a process of infinite division.

– The Paradox of Achilles and the Tortoise concludes that a swifter runner cannot overtake a slower.

– The Paradox of the Arrow argues that an arrow cannot move in flight.

– The Paradox of the Stadium maintains that double the time is sometimes equal to half the time.

– The Paradox of Plurality argues that if space and time are composed of discrete units, the number of such units is both finite and infinite.

Zeno was an Eleatic philosopher, a native of Elea (Velia) in Italy, son of Teleutagoras, and the favorite disciple of Parmenides.

Very little is known of the life of Zeno of Elea. Most of what we know of Zeno comes from what Aristotle said about him in Physics, Book 6, chapter 9.

He was born about 490 BC, and at the age of forty accompanied Parmenides to Athens.

He appears to have resided some time at Athens, and is said to have unfolded his doctrines to people like Pericles and Callias for the price of 100 minae.

Zeno is said to have taken part in the legislation of Parmenides, to the maintenance of which the citizens of Elea had pledged themselves every year by oath. His love of freedom is shown by the courage with which he exposed his life in order to deliver his native country from a tyrant.

Whether he died in the attempt or survived the fall of the tyrant is a point on which the authorities vary. They also state the name of the tyranny differently. Zeno devoted all his energies to explain and develop the philosophical system of Parmenides. We learn from Plato that Zeno was twenty-five years younger than Parmenides, and he wrote his defense of Parmenides as a young man.

Zeno’s contribution to Eleatic philosophy is entirely negative. He did not add anything positive to the teachings of Parmenides, but devoted himself to refuting the views of the opponents of Parmenides. Parmenides had taught that the world of sense is an illusion because it consists of motion (or change) and plurality (or multiplicity or the many).

True Being is absolutely one; there is in it no plurality. True Being is absolutely static and unchangeable. Common sense says there is both motion and plurality. This is the Pythagorean notion of reality against which Zeno directed his arguments. Zeno showed that the common sense notion of reality leads to consequences at least as paradoxical as his master’s.

Major Works of Zeno of Elea

Only a few fragments of Zeno’s writings have been found.