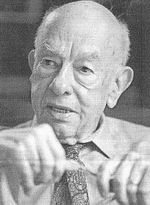 Born in Akron, Ohio, Quine began his philosophical studies at Oberlin College in his native state. He later studied the foundations of mathematical logic with Alfred North Whitehead at Harvard University, where Quine himself became professor of philosophy in 1936. His contributions to the development of contemporary philosophy often involve subtle modification of the empiricist traditions of pragmatism and logical positivism.

In “Two Dogmas of Empricism” (1951), for example, Quine criticized excessive reliance on the analytic/synthetic distinction, maintaining that a whole system of beliefs must be held up for scrutiny in the light of new experience. The other papers collected in From a Logical Point of View (1953) amplify on this suggestion, developing a naturalistic and relativized epistemology. In Word and Object (1960) Quine proposed the indeterminacy of radical translation, on which a single sentence must always be taken to have more than one different meaning.

Author of the popular textbook Mathematical Logic (1940), Quine also applied the techniques of formal reasoning in The Ways of Paradox (1966), and Ontological Relativity (1969), holding that the ontological commitments of any view can be determined by examining the entities over which a formal language expressing it is employed to quantify.

More recent expositions of Quine’s philosophy appear in The Roots of Reference (1973) and Pursuit of Truth (1990). Although his own positions are commonly physicalistic, Quine’s major contribution to contemporary American philosophy has been the consistent application of analytic methods.