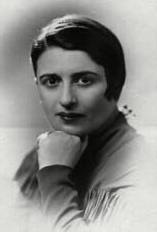 Ayn Rand was born in St. Petersburg, Russia, on February 2, 1905. At age six she taught herself to read and two years later discovered her first fictional hero in a French magazine for children, thus capturing the heroic vision which sustained her throughout her life. At the age of nine she decided to make fiction writing her career. Thoroughly opposed to the mysticism and collectivism of Russian culture, she thought of herself as a European writer, especially after encountering Victor Hugo, the writer she most admired.

During her high school years, she was eyewitness to both the Kerensky Revolution, which she supported, and – in 1917 – the Bolshevik Revolution, which she denounced from the outset. In order to escape the fighting, her family went to the Crimea, where she finished high school. The final Communist victory brought the confiscation of her father’s pharmacy and periods of near-starvation. When introduced to American history in her last year of high school, she immediately took America as her model of what a nation of free men could be.

When her family returned from the Crimea, she entered the University of Petrograd to study philosophy and history. Graduating in 1924, she experienced the disintegration of free inquiry and the takeover of the university by communist thugs. Amidst the increasingly gray life, her one great pleasure was Western films and plays. Long an admirer of cinema, she entered the State Institute for Cinema Arts in 1924 to study screenwriting.

In late 1925 she obtained permission to leave Soviet Russia for a visit to relatives in the United States. Although she told Soviet authorities that her visit would be short, she was determined never to return to Russia. She arrived in New York City in February 1926. She spent the next six months with her relatives in Chicago, obtained an extension to her visa, and then left for Hollywood to pursue a career as a screenwriter.

On Ayn Rand’s second day in Hollywood, Cecil B. DeMille saw her standing at the gate of his studio, offered her a ride to the set of his movie The King of Kings, and gave her a job, first as an extra, then as a script reader. During the next week at the studio, she met an actor, Frank O’Connor, whom she married in 1929; they were married until his death fifty years later.

After struggling for several years at various nonwriting jobs, including one in the wardrobe department at the RKO Radio Pictures, Inc., she sold her first screenplay, “Red Pawn,” to Universal Pictures in 1932 and saw her first stage play, Night of January 16th, produced in Hollywood and then on Broadway. Her first novel, We the Living, was completed in 1934 but was rejected by numerous publishers, until The Macmillan Company in the United States and Cassells and Company in England published the book in 1936. The most autobiographical of her novels, it was based on her years under Soviet tyranny.

She began writing The Fountainhead in 1935. In the character of the architect Howard Roark, she presented for the first time the kind of hero whose depiction was the chief goal of her writing: the ideal man, man as “he could be and ought to be.” The Fountainhead was rejected by twelve publishers but finally accepted by the Bobbs-Merrill Company. When published in 1943, it made history by becoming a best seller through word-of-mouth two years later, and gained for its author lasting recognition as a champion of individualism.

Ayn Rand returned to Hollywood in late 1943 to write the screenplay for The Fountainhead, but wartime restrictions delayed production until 1948. Working part time as a screenwriter for Hal Wallis Productions, she began her major novel, Atlas Shrugged, in 1946. In 1951 she moved back to New York City and devoted herself full time to the completion of Atlas Shrugged.

Published in 1957, Atlas Shrugged was her greatest achievement and last work of fiction. In this novel she dramatized her unique philosophy in an intellectual mystery story that integrated ethics, metaphysics, epistemology, politics, economics and sex. Although she considered herself primarily a fiction writer, she realized that in order to create heroic fictional characters, she had to identify the philosophic principles which make such individuals possible.

Thereafter, Ayn Rand wrote and lectured on her philosophy – Objectivism, which she characterized as “a philosophy for living on earth”. She published and edited her own periodicals from 1962 to 1976, her essays providing much of the material for six books on Objectivism and its application to the culture. Ayn Rand died on March 6, 1982, in her New York City apartment.

Every book by Ayn Rand published in her lifetime is still in print, and hundreds of thousands of copies are sold each year, so far totalling more than twenty million. Several new volumes have been published posthumously. Her vision of man and her philosophy for living on earth have changed the lives of thousands of readers and launched a philosophic movement with a growing impact on American culture.