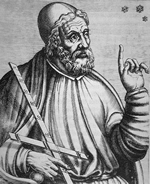 – The position of the celestial bodies can be determined with the help of a kinematic model: These bodies move on eccentric and epicyclic circles with uniform velocities, even though their velocities are not uniform when viewed from the earth; these circles lie inside the sphere of the fixed stars; carefully made observations allow the velocities to be calculated.

– The distance and size of the celestial bodies can be found by determining the size of their eccentric and epicyclic circles relative to the earth’s radius.

– The spherical earth can be projected onto a plane map using geometrical techniques; localities can be plotted on a standard grid of latitude and longitude lines.

– The data derived from experiments can be represented by mathematical equations and can be presented in tabular form.

He was an astronomer, mathematician and geographer. He codified the Greek geocentric view of the universe, and rationalized the apparent motions of the planets as they were known in his time.

Ptolemy synthesized and extended Hipparchus’s system of epicycles and eccentric circles to explain his geocentric theory of the solar system. Ptolemy’s system involved at least 80 epicycles to explain the motions of the Sun, the Moon, and the five planets known in his time.

He believed the planets and sun to orbit the Earth in the order Mercury, Venus, Sun, Mars, Jupiter, Saturn . This system became known as the Ptolemaic system. It predicts the positions of the planets accurately enough for naked-eye observations This is described in the book Mathematical Syntaxis (widely called the Almagest), a thirteen book mathematical treatment of the phenomena of astronomy. It contains a myriad of information ranging from earth conceptions to sun, moon, and star movement as well as eclipses and a breakdown on the length of months. The Almagest also included a star catalog containing 48 constellations, using the names we still use today.