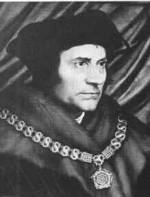 – A program of education grounded on ethics, the study Greek and LAtin, and the imitation of ancient pagan and Christian writers os the soundest plan for spiritual renewal and reform of the church and society.

– Nature teaches that the best society is one whose aim is the temporal well-being or happiness of all its citizens, an aim achieved through the elimination of private property.

– The essential life and the fullness of power of any society resides in its members and no legitimate authority exists apart from the common consent of its members.

– The surest comfort in this life comes frm the knowledge that the Catholic Church’s authority, sacraments, and practices are assured by God’s promise and his continuing presence through the inspiration of the Holy Spirit.

– The greatest pleasure in this world is the meditation on the four last things – on how sin, death, and judgment end in the happiness of eternal life.

He was the son of John More, a prominent lawyer. As a boy he served as a page in the household of Archbishop Morton. He studied at Oxford, and the Inns of Court, but did not automatically follow in his father’s footsteps. He was deeply torn between the appeal of a life of ascetic devotion and an active role in public affairs. In 1499 he determined to become a monk and subjected himself to the discipline of the Carthusians.

During his early manhood, he wrote comedies and spent much time in the study of Greek and Latin literature. One of his first works was a translation of a biography of Pico della Mirandola (1463-1494); he became a close friend with Desiderius Erasmus and he, like them, became a great humanist. More’s sense of obligation to active citizenship and statesmanship finally won out over his monastic inclinations. He entered the parliament in 1504. In 1510, he was appointed undersheriff of London.

During the next decade, More attracted the attention of King Henry VIII, and served frequently on diplomatic missions to the Low Countries. In 1518, he became a member of the Privy Council; he was knighted in 1521. Two years later, More was made Speaker of the House of Commons. As speaker of the House of Commons in 1523, More helped establish the parliamentary privilege of free speech.

He refused to endorse King Henry VIII’s plan to divorce Catherine of Aragon (1527) and marry Ann Boleyn. Nevertheless, after the fall of Thomas Wolsey in 1529, More became Lord Chancellor of England. He was the first layman to hold the post. His work in the law courts was exemplary, but he resigned in 1532, citing ill health and probably feeling that he could not in conscience serve a government that was interfering with the church. Two years later he was imprisoned in the Tower of London for refusing to acknowledge Henry as supreme head of the Church of England. He was found guilty of treason, on evidence that was probably perjured. He was beheaded on July 6, 1535. More was canonized in 1935.