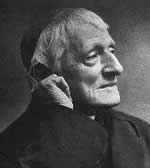 – All things human develop and change in time, including the Church institution and doctrine.

– It is a collective responsibility to see that ideas develop rightly and in a continuous fashion.

– A university is a place of teaching universal knowledge to produce intelligent members of society by fostering cultivation of the mind and formation of the intellect.

– Certitude is ‘an assent, deliberate, unconditional and conscious, to a proposition as true’ – which does not mean we cannot ‘allow in the abstract that it is possible that we are wrong’ but there can be no ‘degree’ of certidute.

Newman was a leading priest in the Church of England whose conversion to Catholicism was a major event of the 1840s.

Newman was a popular speaker and a scholar at Oxford, making his conversion all the more welcome to Catholics and shocking to Anglicans.

His Apologia Pro Vita Sua (1864) is considered a classic among religious autobiographies.