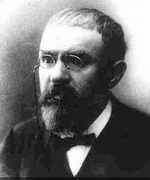 Poincare was born on April 29,1854 in Nancy. Poincare’s family was influential. His cousin Raymond was the President and the Prime Minister of France, and his father Leon was a professor of medicine at the University of Nancy. His sister Aline married the spiritualist philosopher Emile Boutroux.

Poincare studied mining engineering, mathematics and physics in Paris. Beginning in 1881, he taught at the University of Paris. There he held the chairs of Physical and Experimental Mechanics, Mathematical Physics and Theory of Probability, and Celestial Mechanics and Astronomy.

At the beginning of his scientific career, in his doctoral dissertation of 1879, Poincare devised a new way of studying the properties of functions defined by differential equations. He not only faced the question of determining the integral of such equations, but also was the first person to study the general geometric properties of these functions. He clearly saw that this method was useful in the solution of problems such as the stability of the solar system, in which the question is about the qualitative properties of planetary orbits (for example, are orbits regular or chaotic?) and not about the numerical solution of gravitational equations. During his studies on differential equations, Poincare made use of Lobachevsky’s non-Euclidean geometry. Later, Poincare applied to celestial mechanics the methods he had introduced in his doctoral dissertation. His research on the stability of the solar system opened the door to the study of chaotic deterministic systems; and the methods he used gave rise to algebraic topology.

Poincare sketched a preliminary version of the special theory of relativity and stated that the velocity of light is a limit velocity and that mass depends on speed. He formulated the principle of relativity, according to which no mechanical or electromagnetic experiment can discriminate between a state of uniform motion and a state of rest, and he derived the Lorentz transformation. His fundamental theorem that every isolated mechanical system returns after a finite time (the Poincare Recurrence Time) to its initial state is the source of many philosophical and scientific analyses on entropy. Finally, he clearly understood how radical is quantum theory’s departure from classical physics.

A fourth book was published posthumously in 1913.

– The Foundations of Science