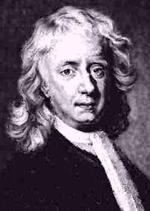 – Invention of differential and integral calculus.

– Clarification of concepts of inertia and force.

– Formulation of three laws of motion, making possible the science of rational mechanics.

– Proof of the composite nature of white light.

– Construction of the first refleecting telescope.

– Insistence on the experimental basis of true science.

Sir Isaac Newton was born in the village of Woolsthorpe, England in the year that Galileo died.

His early studies were inspired by reading Euclid’s Elements. He studied physics at Trinity College, Cambridge. In 1664 he had his annus mirabilis (year of disasters and marvels) when the bubonic plague drove him home and he made his most significant discoveries.

In 1687, Isaac Newton marked the beginning of the modern mathematical approach to science by publishing the Philosphiae Naturalis Principia Mathematica (Mathematical Principles of Natural Philosophy). This introduced Newton’s universal law of Gravitation, laws of Motion, and the calculus.

By the time of Newton, most astronomers had accepted Giordano Bruno’s idea that the stars were like the sun, but much further away. Newton produced an argument for the possibility of an *infinite universe. He asked himself why the stars did not fall together due to their mutual gravitational attraction. He decided that if there were an infinite number of stars, distributed uniformly over infinite space, the attractions might cancel out.

Stephen Hawking in A Brief History of Time says, “This argument is an instance of the pitfalls that you can encounter in talking about infinity… We now know it is impossible to have an infinite static model of the universe in which gravity is always attractive.”

Another argument against an infinite static universe is Olber’s paradox.