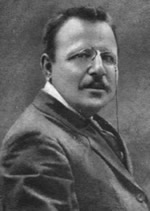 – A work of art is an intuition, an image expressive of and unified by feelings.

– Art is lyrical in that it is expressive of life and feeling; it has aesthetic universally that stems from its origin in intuition.

– Art is independent of all other expressions of human reason.

– Philosophy and history are unified and yet distinguishable; neither discipline can occur without the other.

– The task of philosophy is to make explicit the guiding principles and concepts in historial narrative.

– History consists of the recreation of the past in the mind of the historian; it is this contemporary and autobiographical.

– History is the story of morality and liberty.

Benedetto Croce was born in Pescasseroli, Italy in 1866.

The Croce family were on the island of Ischia during the earthquake of 1883. Croce was buried in rubble but was rescued although his parents and sister died in the disaster.

Croce studied literature and philosophy in Rome and Naples and in 1902 published Estetica. The following year he established the journal La Critica.

In 1910 Croce became a senator and served as Minister of Education (1920-1921). His left-wing political views resulted in him being ousted from public life by Benito Mussolini. He was also forced to resign his professorship at Naples.

Croce returned to public life after Italy surrendered to the Allies in June 1944 and joined the government formed by Invanoe Bonomi. He became a member of the Constituent Assembly and in 1947 was elected president of the Italian Liberal Party.

– Aesthetic as Science of Expression and General Linguistic, 1902
– Benedetto Croce’s Poetry and Literature: An Introduction to its Criticism and History, 1936
– Guide to Aesthetics, 1912
– Historical Materialism And The Economics Of Karl Marx, 1900
– History: Its Theory and Practice, 1917
– History as the Story of Liberty, 1937
– Logic as Science of the Pure Concept, 1905
– My Philosophy, 1949
– Philosophy of the Practical: Economic and Ethic, 1909
– What Is Living And What Is Dead Of The Philosophy Of Hegel, 1915