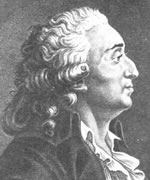 – There is limited certainty in all branches of human knowledge.

– Probability theory can be applied to natural and social sciences.

– There can be continuous progress and improvement in human affairs.

– Mathematics can be applied to the social sciences and to human problems.

– Human suffering can be ameliorated through social scientific study.

– There are rational and scientific reasons why slavery should be abolished.

– There is a reasonable basis for decision making in human affairs.

Marie Jean Antoine Nicolas Caritat, Marquis de Condorcet was born at Ribemont, Picardy, France. He was educated at the Jesuit College in Reims and at the College of Navarre in Paris.

At the age of sixteen, his mathematical abilities gained the praise of Dâ€™Alembert and Clairaut. A few years later he published a book on the integral calculus. He became a member of the Academy of Sciences in 1769. In 1785, he published a book on the calculus of probability and an important essay on the application of this to deciding the validity of majority decisions in various voting methods. His interests, however, were much broader than mathematics. Through his friendship with the economist Turgot, he became inspector-general of the mint. He moved in the same social circles as Voltaire. He published letters on the corn laws and on theology. He worked for the suppression of slavery.

He welcomed the French Revolution, writing pamphlets supporting democracy and proposing a new constitution. He became a member of the municipality of Paris in 1790, represented Paris in the legislative assembly, and became one of its secretaries. In this capacity he was the principal author of the address to the European powers when they threatened wage war against the new French democracy. As a member of the committee for public instruction, he drew up a plan for the organization of a comprehensive system of state education. In 1791, he announced his support for a republican form of government, ahead of such groups as the Jacobin Club.

His criticism of the death penalty urged for Louis XVI and his objection to the assumption of judicial functions by the political Convention, led to his condemnation as an enemy of the Republic. He fled into hiding at the home of Madame Vernet, who with his wife and friends persuaded him to write, under difficult conditions, his main work, A Sketch for a Historical Picture of the Progress of the Human Mind, and some essays. For his own safety, he was kept as a prisoner in the house. When he eventually escaped from his friends, he was captured by villagers who, recognizing the marks of gentility and education, assumed he was an enemy of the Republic and imprisoned him. He was found dead shortly afterwards.