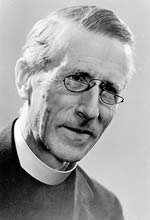 – Evolution, cosmogenesis, has a direction.

– Evolution ascends toward a final point, or Omega, which exerts an attraction on the process although it stands outside of it.

– Evolution has a within as well as a without, taking place on both the physical and psychic levels.

– Ultimately all energy is one, namely, psychic energy, or Love.

– Omega is the Cosmic Christ who attracts an increasingly personalizing universe to a kind of cosmic mystical consciousness.

– God and the evolving universe are united one with another.

– The moral and spiritual responsibility of human beings is to advance the work of evolution and thus to create the future.

Pierre Teilhard de Chardin was born in Auvergne, France. He lectured in science at the Jesuit College in Cairo, became professor of geology at the Intitut Catholique in Paris, and studied at the Institute of Human Paleontology at the Museum of Natural History in Paris.

In 1922 he obtained his doctorate and a year later left France on a paleontological expedition to China, where he stayed until 1946.

His many writings include Building the Earth, Le Milieu Divin, Trialogues at the Edge of the West, various essays. His major work, The Phenomenon of Man (written 1938-1940) was posthumously published. Based on TeilhardÃ­s scientific thinking, it argues the humanity is in a continuous process of evolution towards a perfect spiritual state.

Today Teilhard is best known for his unique evolutionary cosmology which supporters believe predicted the arrival of a global “internet” more than half a century before its creation. Teilhard described this “Noosphere” as a global network of trade, communication, exchange of knowledge and cooperative research which would ultimately weave into a sphere of collective thought. He also imagined this next evolutionary stage of humanity as a complex membrane of information enveloping the globe and fueled by human consciousness. Teilhard maintained that humankinds combined achievements, the only realized purpose in the universe, would be secured and advanced through this global network of collective minds.