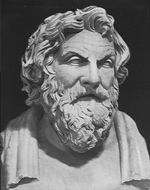 Antisthenes, an Athenian philosopher, was born in Athens about 440 BCE. of a Phrygian or Thracian mother, and thus was only a half citizen.

In his youth he was engaged in military exploits, and acquired fame by the valor which he displayed in the battle of Tanagra. His first studies were under the direction of the sophist Gorgias, who instructed him in rhetoric. Soon growing dissatisfied with the futile labours of this school, he sought for more substantial wisdom from Socrates. Captivated by the doctrine and the manner of his new master, he prevailed upon many young men, who had been his fellow-students under Gorgias, to accompany him. So great was his ardor for moral wisdom, that, though he lived at the Piraeus, he came daily to Athens to listen to Socrates.

While he was a disciple of Socrates, he exhibited a severity of manners by his unkept dress. He frequently appeared in a threadbare and ragged cloak. An anecdote relates that Socrates, remarked that Anthisthenes took pains to expose, rather than to conceal the tattered state of his dress, and said to him, “Why so ostentatious? Through your rags I see your vanity.”

After the death of Socrates in 339 BC. Antisthenes established a school in the only gymnasium open to half-Athenian descent. The place was called Cynosarges, hence his followers bore the name “Cynics”. It is also argued that the followers were called Cynics from the habits of the school, which, to the more refined Athenians, appeared those of dogs rather than of men. Towards the close of his life, the gloomy cast increased to such a degree as to become troublesome to his friends, and the object of ridicule to his enemies.

Like Socrates, he regarded virtue as necessary – indeed, alone sufficient – for happiness, and to be a branch of knowledge that could be taught, and that once acquired could not be lost. Its essence consists in freedom from wants by the avoidance of evil (by evil meaning pleasure and desire).

Regarding his religious views, Antisthenes maintained that, in the universe, everything is regulated by a divine intelligence, from design, so to benefit the good person who is the friend of God. For the sage shall possess all things. This doctrine was connected with his ethical views, by indicating the physical conditions of a happy life. However, it led him to declare that there is but one natural God, but many popular deities; that God cannot be known or recognized in any form or figure, since he is like nothing on earth. Hence undoubtedly arose his allegorical explanation of mythology.

In addition to his precepts, he also taught by example. He wore no other garment than a coarse cloak, did not cut his beard, and carried a sack and staff like a wandering beggar. This was meant as an expression of opposition to the gradually increasing luxury of the age, intending to bring men back to their original simplicity in life and manners. Antisthenes appears to have been carried to excess in his virtuous zeal against the luxury, although the accounts which have come down to us respecting him may be exaggerated. In any case, his contention with the tendency of his age brought negative reaction from his contemporaries. Indeed, his school met with so little encouragement, that, in annoyance, he drove away the few scholars he had. Diogenes of Sinope, who resembled him in character, is said to have been the only one that remained with him to his death.

Antisthenes lived to the age of seventy. Antisthenes wrote many books, however, unlike Plato, his works have been lost and he is a largely forgotten figure in the history of philosophy. Even those who remember him disagree on his importance. In particular, disputes continue to this day as to whether or not he should be regarded as the originator of Cynicism.

– His works have been lost.