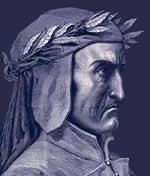 – Love is the movement of the spirit and the primordial energy of the universe.

– The energy of love is manifested in three actions.

– In philosophical love, the psyche contemplates the world of nature through the exercise of reason.

– In mystical love, the psyche desires union with God, which is the harmony of the will of the soul and the will of God.

– Poetry reveals the movement of the spirit, or love, through its literal sense.

– The literal sense of poetry cntains the manifestations of love in terms of the poem’s allegorical, moral, and anagogical meanings.

Dante Alighieri (1265-1321) was the leading poet of the late Middle Ages and early Renaissance. He was also a prominent thinker in the fields of literary theory, moral and social philosophy, and political thought. His most famous work, The Divine Comedy, is a literary landmark and a synthesis of his political, religious, and social views. Dante’s embrace of human individuality and happiness and his use of Italian rather than Latin in The Divine Comedy are often considered to signal the end of the Middle Ages and the rise of Renaissance humanism. Dante was born to a noble Florentine family who belonged to the White Guelf party and were allied with the papacy. His involvement with the chaotic politics of the time, however, convinced Dante of the necessity for political unity and the separation of church and state. Nevertheless, after the Black Guelfs took power in Florence, Dante was forced into exile for the balance of his years.

Dante’s conceptions of the correct political, religious, and social orders were a powerful critique of existing practices. His work De monarchia argues for a supreme world monarchy with all other temporal orders subordinate to it. The church’s sole mission, in this view, is to concentrate on religious matters, especially salvation. In this scheme Dante accepted the claims of neither the emperor nor the papacy (articulated famously by Boniface VIII to supremacy over both spheres. Dante argued that both leaders were neglecting their duties, as the current disorder seemed to prove. His work was condemned as heretical.

While Dante incorporated many Scholastic themes and beliefs into his works, his ultimate doctrine was far different and humanistic in nature. He did not believe that this life is merely a necessary burden in preparation for eternal life, but that individuals should try to be happy on earth. Moreover, he believed the individual soul is part of the collective whole but retains its individuality. His focus on the individual was part of his larger scheme and is evident in the numerous distinct personalities his character meets in The Divine Comedy. His design for a world order incorporates his belief in the dual nature of humanity. In this view, man is of two parts: earthly/temporary (the body) and spiritual/eternal (the soul). Man’s duty is to attempt to achieve earthly happiness and everlasting life. This view of humankind’s nature and duties was an integral part of Dante’s political beliefs and reinforced his view that church and state must be separate. Indicative of the emergence of humanism was the larger role that Dante provided for the humane arts in ordering earthly and spiritual matters. In his criticism of the church and empire and his reworking of Christian doctrine, Dante ushered in a new era of intellectual endeavor.

– “Here my powers rest from their high fantasy, but already I could feel my being turned- instinct and intellect balanced equally, as in a wheel whose motion nothing jars- by the Love that moves the Sun and the other stars.” (from “The Divine Comedy”, 1308-1321)

– “Everything, by an impulse of its own nature, tends towards its perfection.” (from “The Banquet”)

– “I am one who, when Love inspires, attend, and according as he speaks within me, so I express myself.” (from “The Man of Genius” by Cesare Lombroso)

– “The hottest places in hell are reserved for those who in a time of great moral crisis maintain their neutrality.”