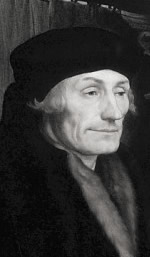 – Perfectability is intrinsic in human beings.

– Intrinsic perfectability implies the power of self-determination and moral achievement.

– The examplar of moral achievement is Jesus Christ, whose life of humility, patience, and love is open for all Christians to imitate.

– Interior piety, scriptural exegesis, and study of classical and patristic writings are necessary in the imitation of Christ.

– Imitating the life of Jesus Christ is a philosophy, the ‘philosophia Christi’, which ought to inspire secular and religious leaders to govern with compassion for the well being of all Christian people.

Desiderius Erasmus was born in Rotterdam in about 1466. He joined the Augustinian monastery at Steyn in 1487 and was ordained in 1492.

He spent time in France before moving to England where he taught at Oxford University (1499) and Cambridge University (1509-14) where he was Professor of Divinity.

Erasmus became the leader of the movement of scholarship known as humanism. Erasmus believed strongly in the human capacity for self-improvement through education. He argued that world peace could be obtained by consensus and consent.

He advocated a tolerant Christianity and was highly critical of the abuses of the Catholic Church and his ideas helped to prepare the way for Martin Luther and the Protestant Reformation. However, Erasmus disapproved of Luther’s radical methods and criticized him in his book De Libero Arbitrio (1523).

– “Many times what cannot be refuted by arguments can be parried by laughter.” (from “The Praise of Folly”, 1509)

– “Nothing is so ridiculous that usage may not make it pass.” (from “Folkways: A Study of the Sociological Importance of Usages, Manners, Customs, Mores, and Morals” by William Graham Sumner)