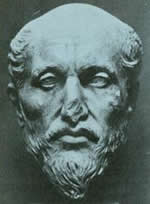 – The soul is more important and real than the body or any other material object.

– In its pure state, the World-Soul is the same as the Intellect (or Mind).

– The Intellect is a system of Platonic ideas that exists simultaneously in all individual souls.

– Above the Intellect is the One, the absolute unity from which all things come.

– The One is beyond being and is indescribable.

– The three principal levels of reality, in descending order, are the One, the Intellect, and the Soul.

– The goal of human life is to return to the One through developing a good moral character, cultivating reason, and experiencing, a mystical unity in which body, soul and intellect are left behind.

In his late twenties, Plotinus began to study in Alexandria with Ammonius Saccas, a shadowy figure who was also the teacher of the theologian Origen.

After eleven years with Ammonius, Plotinus joined an expedition to Persia to learn Persian and Indian wisdom. The trek proved unsuccessful and Plotinus moved to Rome. There he established a school of philosophy and a friendship with the emperor Gallenius.

At one point he sought permission to found a city based on Plato’s Republic, but the plan came to naught. He stayed in Rome, teaching and writing, until the death of the emperor in 268. He then moved to the home of a friend where he died in 270, apparently from leprosy.