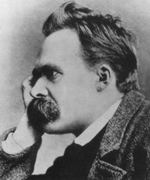 – Self-deception is a particularly destructive characteristic of Western culture.

– Life is the will to power; our natural desire is to dominate and to reshape the world to fit our own preferences and to assert our personal strength to the fullest degree possible.

– Struggle, through which individuals achieve a degree of power commensurate with their abilities, is the basic fact of human existence.

– Ideals of human equality perpetuate mediocrity – a truth that has been distorted and concealed by modern value systems.

– Christian morality, which identifies goodness with meekness and servility, is the prime culprit in creating a cultural climate that thwarts the drivefor excellence and self-realization.

– God is dead, a new era of human creativity and achievement is at hand.

Friedrich Wilhelm Nietzsche was a profoundly influential German philosopher, psychologist, and philologist. He was a severe critic of Christianity, Utilitarianism, German idealism, German romanticism, and of modernity in general. Nietzsche is sometimes identified with Philosophical Romanticism, but he himself vociferously denied Romantic tendencies in his work. He is often identified as the inspiration for existentialism and postmodernism, though there is disagreement concerning whether these movements interpreted him correctly; some see Martin Heidegger’s as the greater influence.

Friedrich Nietzsche was born on October 15, 1844 in the small town of Röcken bei Lützen, near Leipzig, Saxony. He was born on the 49th birthday of King Friedrich Wilhelm IV of Prussia and was thus named after him. His father was a Lutheran pastor, who died of encephalomalacia in 1849, when Nietzsche was four years old. In 1850 Nietzsche’s mother moved the family to Naumburg, where he lived for the next eight years before heading off to school. Nietzsche was now the only male in the house, living with his mother, his grandmother, two paternal aunts, and his sister Elisabeth. He was very pious as a young child. A brilliant student, he became special professor of classical philology at the University of Basel in 1869 at the age of only 24. He had already met composer Richard Wagner in November of 1868.

At Basel, Nietzsche found little satisfaction in life among his philology colleagues and he established closer intellectual ties to the historian Jakob Burckhardt, whose lectures he attended, and the theologian Franz Overbeck. His inaugural lecture at Basel was Über die Persönlichkeit Homers. He made frequent visits to the Wagners at Tribschen. When the Franco-Prussian war erupted in 1870, Nietzsche left Basel and, being disqualified for other services due to his citizenship status, volunteered as a medical orderly on active duty.

His time in the military was short, but he experienced much, witnessing the traumatic effects of battle and taking close care of wounded soldiers. He soon contracted diphtheria and dysentery and subsequently experienced a painful variety of health difficulties for the remainder of his life. Upon return to Basel, instead of waiting to heal, he pushed headlong into a more fervent schedule of study than ever before. In 1870 he gave Cosima Wagner the manuscript of The Genesis of the Tragic Idea as a birthday gift. In 1872, he published his first book, The Birth of Tragedy. A biting critical reaction by the young and promising philologist Ulrich von Wilamowitz-Moellendorff, as well as its innovative views of the ancient Greeks, dampened the book’s reception among scholars.

In April of 1873, Wagner incited Nietzsche to take on David Friedrich Strauß, whose book Der alte und der neue Glaube Wagner found shallow and who sided with the composer and conductor Franz Lachner who had been dismissed on account of Wagner. In 1879, Nietzsche retired from his position at Basel due to his continued poor health. From 1880 until his collapse in January 1889, Nietzsche led a wandering existence as a stateless person, writing most of his major works during this period. His fame and influence came later, despite (or because of) the interference of his sister Elisabeth, who published selections from his notebooks as The Will to Power in 1901.

Nietzsche endured periods of illness during his adult life. In 1889, after the completion of Ecce Homo, his health rapidly declined until he collapsed. At that moment, he is said to have tearfully embraced a horse in Turin because it had been beaten by its owner. He was taken back to his room and spent several days in a state of ecstasy writing letters to various friends, signing them Dionysus. He gradually became less coherent and almost entirely uncommunicative. His friend Peter Gast observed that he retained the ability to improvise beautifully on the piano for some months after his breakdown, but this too eventually left him.

The initial symptoms of Nietzsche’s breakdown, as evidenced in the letters he sent to his friends in the few days of lucidity remaining to him, bear many similarities to the ecstatic writings of religious mystics. These letters remain the best evidence we have of Nietzsche’s own opinion on the nature of his breakdown. Nietzsche’s letters describe his experience as a religious breakthrough and he rejoices, rather than laments. Most Nietzsche commentators find the issue of Nietzsche’s breakdown and “insanity” irrelevant to his work as a philosopher, for the tenability of arguements and ideas are of utmost significance rather than the originator eo ipso, though some, including Georges Bataille, have disagreed.

Nietzsche spent the last ten years of his life insane and in the care of his sister Elisabeth. He was completely unaware of the growing success of his works. The cause of Nietzsche’s condition has to be regarded as undetermined. Doctors later in his life said they were not so sure about the initial diagnosis of syphilis because he lacked the typical symptoms. While the story of syphilis indeed became generally accepted in the twentieth century, recent research in the Journal of Medical Biography shows that syphilis is not consistent with Nietzsche’s symptoms and that the contention that he had the disease originated in anti-Nietzschean tracts. One of the best arguments against the syphilis theory is summarized by Claudia Crawford in the book To Nietzsche: Dionysus, I Love You! Ariadne. Another speculation is that he had a brain condition similar to his father’s. His handwriting in all the letters that he had written around the period of the final breakdown showed no sign of deterioration.