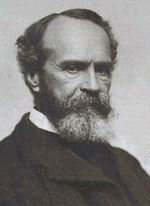 – Human consciousness is selective; it concentrates on some things and ignores others.

– Ideas and beliefs are essentially plans for organizing and structuring our experience and world.

– One cannot prove finally whether human action is free or determined, but there are good reasons, especially moral ones, for believing that human action involves freedom.

– A person’s psychological makeup affects his or her religious experience, and that experience is best evaluated in terms of its moral quality.

– Pragmatism consists of two parts: It is a method for the determination of meaning, and it is a theory about the nature of truth.

– The truth or falsity of a judgment, its agreement or disagreement with reality, depends on obtaining or failing to obtain corroboration of the expectations that follow from the judgment in question.

William James (like his younger brother, Henry James, one of the important novelists of the nineteenth century) received an eclectic trans-Atlantic education, thanks in large part to his fluency in both German and French. His early artistic bent led to an early apprenticeship in the studio of William Morris Hunt in Newport, Rhode Island, but yielded in 1861 to scientific studies at Harvard University’s Lawrence Scientific School.

In his early adulthood, James suffered from a variety of physical and mental difficulties, including problems with his eyes, back, stomach, and skin, as well as periods of depression in which he was tempted by the thought of suicide. Two younger brothers, Garth Wilkinson (Wilky) and Robertson (Bob), fought in the Civil War, but the other three siblings (William, Henry, and Alice) all suffered from periods of invalidism. James was, however, able to join Harvard’s Louis Agassiz on a scientific expedition up the Amazon River in 1865.

The entire James family moved to Cambridge, Massachusetts after William James decided to study medicine at Harvard Medical School and Massachusetts General Hospital in 1866; he obtained his degree in 1869 after several extended interruptions of his studies for illness, which led him to live for extended periods in Germany, in the search of cure. (It was at this time that he began to publish — at first, reviews in literary periodicals like the North American Review.) What he called his “soul-sickness” would only be resolved in 1872, after an extended period of philosophical searching.

James’s time in Germany proved intellectually fertile, for his true interests were not in medicine but in philosophy and psychology. Later, in 1902 he would write: “I originally studied medicine in order to be a physiologist, but I drifted into psychology and philosophy from a sort of fatality. I never had any philosophic instruction, the first lecture on psychology I ever heard being the first I ever gave” (Perry, The Thought and Character of William James, vol. 1, p. 228).

James studied medicine, physiology, and biology, and began to teach in those subjects, but was drawn to the scientific study of the human mind at a time when psychology was constituting itself as a science. James’s acquaintance with the work of figures like Hermann Helmholtz in Germany and Pierre Janet in France facilitated his introduction of courses in scientific psychology at Harvard University. He established one of the first — he believed it to be the first — laboratory of experimental psychology in the United States in Boylston Hall in 1875. (On the question of this claim to priority, see Gerald E. Myers, William James: His Life and Thought [Yale Univ. Press, 1986], p. 486.)